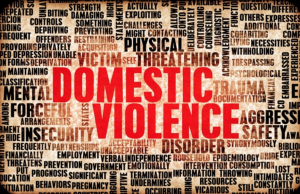 In the United States, 20 people are abused by a partner every minute. That’s one case of abuse every three seconds. 1 in 3 women and 1 in 7 men experience violence by their partners in their lifetimes. Domestic violence and its effects cost the U.S. more than $8.3 billion per year.

Oftentimes domestic violence will cause a spouse or partner to decide to leave a marriage or long term relationship. Washington is a “no fault” state, which means that the court does not hold the person who did the bad behavior (the domestic violence) responsible in terms of it making a difference in how the divorce turns out.

Once divorce proceedings start, often peoples’ worst behavior can come out, especially when children are involved. One party may make mean comments to the other. Threats of inability to see children or failure to pay support can occur. Grumblings about the “new” relationship one party is in and comments about that person which are threatening can occur.

The party on the receiving end of these comments can be scared, concerned, emotional, upset or angry. Do any of these things matter in the court’s eyes? The answer is not black and white…

Domestic violence is not limited to actual physical abuse. In situations where people were intimate partners, have a child together, or have been married, the law provides that it can take other forms. Making threatening statements, making annoying or harassing phone calls, and making unwanted contact directly or indirectly may all qualify as domestic violence.

In family law disputes, people are often not on their best behavior. Often one person feels they are being wronged by the other. Sometimes, people send emails or leave phone messages that the other party finds disturbing. The party placing the call or emailing feels as though they need to “get through” to the other person so the person can see the logic behind how they think. When that doesn’t work, people may contact a friend of the other person and ask them to convey a message.

These types of contacts can be defined as domestic violence in family court. While they might not have been “violent” in the way we normally think of the word, they can give rise to a restraining order because the party getting them feels concern for their safety.

There are often unintended consequences. These include the order being registered with law enforcement. There can be restrictions on custody arrangements that may be ordered by the court. This can happen even when the conduct was not directed toward, nor did it involve, children at issue in the divorce proceeding.

People involved in family law proceedings need to be smart and emotionally controlled.

Those that do not think before acting can find themselves dealing with long-term consequences. Restraining orders can last for years. These orders are subject to renewal at the request of the protected party in Washington State and King County.

If you have someone accusing you of domestic violence or threatening behavior, contact an attorney.

The results of a protection order hearing can drastically impact your ability to have contact with your children. Only a competent, experienced legal counsel can help guide your tactical approach to such a hearing and ensure a good result.

(Portions of this article attributed to Fred Silberberg’s article in the Huffington Post “Is That Domestic Violence?”)