Family law forms in King County are going through some large scale revisions with the goal of making them more user friendly and less confusing. The new forms are being referred to as “plain language” forms.  Since 2009 volunteers including practicing attorneys, judges and lay people have been meeting and discussing how to make the current forms better. The volunteers comprise a group called the Access to Justice Board.

The Access to Justice Board’s Pro Se Project Forms Review Work Group is converting the mandatory domestic relations pattern forms into plain language. The workgroup’s goal is to create forms that allow parties to understand the forms and the legal concepts easily and completely.

The Supreme Court has weighed in on the “plain language forms” as well. See : https://www.courts.wa.gov/forms/forms_comment/plainLanguage/ATJ_PlainFormsSupport.pdf

The time has come where the proposed “new and improved” forms are available for the public and practicing attorneys and judges to look at. A “comment period” is open between now and October 31 of this year.  Based on comments and suggestions made during this period on the revised forms, the committee working on this project will entertain modifications to the proposed plain language family law forms.  The “final version” of these new forms will be posted on www.courts.wa.gov/forms by January 1, 2016.

The court forms will be considered MANDATORY as of April 1, 2016.  Old forms likely will not be accepted by Commissioners as of April.  In the meantime, attorneys are NOT to use the plain language family law forms.  Constructive criticism on the revised content, lay out and graphics is welcomed in the meantime, however.  To make a comment, go to www.courts.wa.gov.  Click on “court forms”.  Next, click on “view the plain language forms posted for comment.”

The new forms are changed in some large and some small ways.  As an example, current forms have sets of letters at the right first page of the form like PPP (which stands for “proposed parenting plan”).  There is also series of numbering and labels on the forms which many have said is confusing.

The new proposed forms, on the other hand, have similar but more logical form labels.  All labels are FL (for family law) which is followed by a word which describes the kind of sub form it is.  This makes it easier for lawyers and pro se parties to understand the basics of what each form is used for. 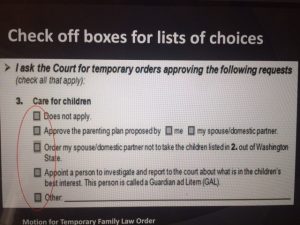 Likewise, the look of the forms is also changing, which is a relief to many.  The current forms are extremely heavy on text, which is printed in small font and filled with lots of legal words the average person doesn’t know and likely may not understand.  The committee worked hard to use words that were more logical and more easily understood by the “average” reader (oftentimes a non lawyer).  Instead of having small places where parties could mark that something applied to them, the new forms have more spacing between items and simpler words (see the example form above left).  The committee also included more spots where the section “other” is included, so parties could include relevant information that might be helpful to the court in making important decisions on their case.

As these new forms become the forms used by King County, it is likely that other counties will follow the lead set by King.  In an exciting side note, over a dozen of the forms are also being translated to Spanish.  There is talk of trying to translate them into several other languages as well, but funding for that is currently not in county coffers.

If you are considering a divorce, especially after the holidays and in the beginning of 2016, it is highly advised that you consult with an attorney who has gone through training on these new forms. Overlooking an important section or incorrectly marking the new forms in an area could cause serious issues with asset and debt distribution, child visitation and child support.

Miller Law Group attorney Jennifer Miller attended the 1.5 hour training put on by King County in September and is happy to help you with moving on to the next stage in life if a divorce is what you need to get you there.