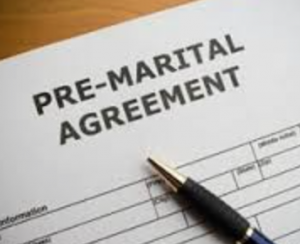 If you read the covers of magazines at the supermarket, you see impending divorces of celebrities and discussions about their pre-marital agreements, alimony, and child custody battles weekly. Lots of money is at play, and almost all celebs seem to have gotten pre nups pre marriage.

You may have heard that if Kim Kardashian and Kanye West divorce, she gets $1 million for every year she stays married to West with a cap of $10 million.

Brad Pitt and Angelina Jolie’s pre-marital agreement reportedly stipulates that each of them is allowed to exit the marriage with what they brought in. (That’s $240 million for Pitt and $185 million for Jolie.) Anything they make while married is put into a trust for their children.

Regular Joes and Janes can benefit from a thoughtfully crafted pre-marital agreement (often referred to as a prenup or PMA).  Many prenups contain common sense terms, like the fact that property one person owned prior to marriage is their own “separate” property.

Other not so common clauses can be put in as well. For example, Khloe Kardashian’s prenup with Lamar Odom included a $5,000/month stipend for shopping. (Of course, given what he’s earning now, she’s probably not getting her monthly stipend.)

There can also be terms which involve sanctions for bad behavior, a reward or pay day for each year a spouse stays in the marriage, and allowances for certain things.

Celebrity divorce attorney Raoul Felder once said, “Today if you don’t have a prenup and you’re getting married, you ought to see a psychiatrist and not a lawyer.”

This comment, while funny, has truth to it. Most people, generally, can benefit from a prenuptial agreement. Think of it like this… a prenuptial agreement is like insurance: a small one-time cost for something you hope never to use. But, on the upside, it’s there if needed. If you look at it that way, a PMA is a lot less stressful and a lot more useful. 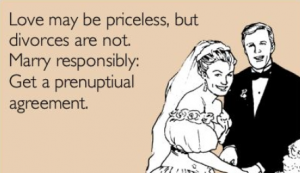 Prenups can help delineate the debts and separate assets that each person brings into a marriage. A PMA ensures that a spouse does not have to take responsibility for debts they didn’t incur if there is a divorce.

While many agree that getting a PMA is a smart idea, discussing the topic can be touchy, as few want to discuss the possibility of divorce at the outset of a marriage. The stats tell you all you need to know about why it is so important to do just that: over 50 percent of first marriages end in divorce. Scarier still, over 65 percent of second marriages end in divorce. And, those who are on their second marriage are often older. With age often comes the acquisition of more assets and property. So, the odds are better than not that there will be a spirited conversation about splitting assets and debts at the end of a marriage. A PMA makes those conversations easier and quicker, should a beautiful marriage, for whatever reason, become not so pretty.

It’s important to consider a PMA and work through the details of it with plenty of time before a wedding date creeps up on parties. There is nothing like a PMA to take the joy out of wedding planning and add stress to the week prior to a wedding.

It must be voluntary that each person enters a PMA. And, each person should have the chance to talk with an attorney about their proposed PMA. If these two things do not exist, there is a potential case that a PMA was signed under coercion or duress, which would invalidate it.

A prenuptial agreement is most commonly made with each party being represented by a family law attorney. Having a PMA drawn up will cost between $700 and several thousand dollars depending on the specifics of the agreement and the attorneys involved.

Although most states permit PMAs to deal with alimony, a court is allowed to invalidate the alimony provisions if the judge believes the provisions to be unjust. (This can occur in long term marriages if there is a great disparity between spouses’ incomes and no or little alimony being paid.)

It’s important to know what can’t and what can be in a PMA.

What Can Not Be In a PRE-MARITAL AGREEMENT?

There are many issues involved in a divorce that a prenuptial agreement cannot cover including:

What Can Be In A PRE-MARITAL AGREEMENT?

PMAs can include many combinations of legal agreements.

Below are some of the most common:

If you are considering getting married, you are strongly encouraged to consider if a pre-marital agreement is right for you. Consult with legal counsel to see how having a PMA might give you (and possibly your parents and a future spouse) peace of mind.